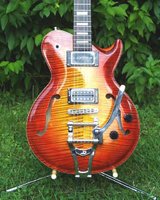 Recently I built another semi-acoustic guitar. I named it Indie, because it doesn't really fit into the frame "Blues - Jazz - Modern - Heavy". It should be playable everywhere. This time the model of the form was the classic Les Paul, but I added my personal touch. Meanwhile I have seen "my" form in the guitar and bass, but I'm not the first one to deal with this form. So, now to the photo and then to my objectives for the construction.

I wanted a rich tone, not too "vintage" but of course not too "modern, sterile" and with an independent character. I also wanted to have the possibility to roar with a proper distortion unit and without muddying. It should be suitable for the stage in so far as there is no feedback even at high volumes when you are standing directly in front of it. The circuitry should be as simple and straightforward as possible, with "fat" - "medium pressure" - "solo" immediately available - just like on the Les Paul. But I only wanted to have a volume and tone control. As a further treat I wanted a "jammer's hook". It shouldn't respond as fast as the one on the Strat or similar, which means that larger lever movements change the tone more - no need for dive bombs. That's where I came across the "Duesenberg super Tremula", exactly the quality I was looking for! The other "ingredients" are listed in the table below.

The first guitar of this kind was the red one, but of course some time has passed in the meantime. I meant that in the way that I optimized the construction and the building process by further experience, imagined a sound picture by special wood selection and pickups and finally achieved this, if not exceeded. The "red" had its own, in my opinion appealing and independent form.What brought me back to the shape of the "Paula" was, among other things, the annoyance of making an expensive special case for my special outer shape - the Indie fits into any standard case!

And how she sounded as if she was ready? The light wood construction (2,7 kg complete), it has a strong percussive and fast tone response. If you play it non-reinforced, you can hear a fine tone distribution and just feel the long sustain. Increasingly she is just in the center position of the toggle switch clear transparency, warmth and assertiveness of it but not lacking in nuance-richness. On the neck it generates the smacking twang of an old LP P90 while tired at the dock of the HFS brings pressure and never starts to become mushy or even somewhere loses power.

I am a bit proud of the result. When I play this guitar, I don't want to put it down. If I have now whetted someone's appetite for "wanting to", they are welcome to get in touch with me.

The guitar is structured as follows