Tools, parts and what you need for guitarmaking

On this site, I agree to the Rohholzauswahl.

When I speak of wood choices here I limit myself to the description of the edited by me timbers: spruce and sycamore. Both timbers were used in musical instruments for centuries and can be found in our local forests. I renounce deliberately the botanical description, this I refer to the like often encountered on the Internet wood lexicons. It turns rather now the question of which trees are suitable and which are not? How do you get such a timber? In what quantities? Further images from the professional wood Company:

Where so grows a wood?

The best locations for the tonewood
· located in the mountains (reduced growth rate and low latewood percentage)
· ensure a regular supply of water during the growing season (regular growth)
· are more or less protected from the wind (no compression wood, no cracks or pitch pockets)
· are not too steep (no pressure timber)

Of course, one should not just go in a mountain forest and cut down a tree, in Germany (in the neighboring European area, it will probably be similar) there are various possibilities. On the one hand you can directly go to the producers (forestry) or to a dealer, the already purchased and sorted the desired range has (wholesalers). The wood cultivation (the production) is often state-owned, forestry offices sell the wood. Are the forests in private ownership, the forest farmers have often in the forest farmers' associations joined forces who sell the wood. Wholesale available from this wood.

The forest industry is normally seasonal and the vast timber trade takes place in the winter months, because at this time resting the normal crop economy and the farmer strikes tradtitionsgemäß wood. Wood prices for different qualities use stay within a narrow band. Forestry offices determine average prices which then hardly change. Thus, a lot of wooden normal quality sold throughout the year. Prices directly from the producer are of course cheaper than from wholesalers. But this presents its service also in turn represents a value (sorting, transport, Sägwerk etc.)

In addition to direct purchase, you can buy logs even when Wertholz auctions. A Master Sets namely out as particularly good, try the forestry departments or forest farmers' associations through auctioning of individual strains to obtain a higher price. For this purpose, mostly often lined up in the spring of large timber collection points several hundred individual tribes together and numbered. Large industrial customers on request lists, on which the root number, the type of wood, the dimensions and the quality stated. The interested party has the sense that he makes a bid formation, which he indicated what price he is willing to pay per cubic meter of wood. These lists must be received sealed in an envelope at the date of submission are. Then the respective bids will be compared to the master number for bid opening and the one who is awarded the contract, who wanted to pay the highest price for it. Subsequent Bid is not possible.

After which tree on the lookout?

Age:
Age at least 120-150 years, more 250 years. Latewood proportion and uniformly low. Diameter of the trunk at 60 cm. Depending on the blend amount is needed for large guitar tops by radial section stem thicknesses from 85-90 cm.

Structure:
stem portion is considered to be suitable tone wood when it grew at least 5m above the ground. Tribes possible knots. According to TLG the GDR (K1) per 2 meters in length were in the best quality are no branches. Examine cut side branch tips, possibly evidence of Wertholzastung.
Distance between the annual rings between 1-1.5mm for excellence. Uniformity between early and late wood, ie the distances between the annual rings are uniform.

Color:
If possible, white and shining mirror. No color changes.

Precipitation:
The wood to be righteous like moon in December new moon. It is said that justice moon felled timber, which was downhill lying stored until spring was particularly good. If you wait until the tree is trying to build new shoots and only then saws off the branches, one should have a dehumidified and entharzten tree trunk, which sounds particularly good.

Under the bark:
Also a quality criterion is the structure of the trunk under the bark. Small scar-like grooves indicate stiff, good tone wood. Often such strains have also stimulate growth hazel. 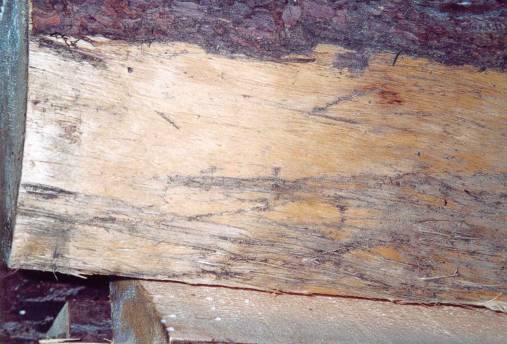 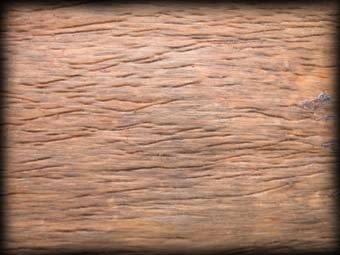 On what you have to watch?

The following wood errors limit the applicability to Tonholz very strong one:

Knots: Tonholz must be free of knots! Small knots and knots may be located where these cease after use blank. However, it is important to ensure that the evasive growth of the wood fibers to the defects is not too large.

Interlocked: the growth direction Modified rather than straight from the bottom to the top so that the fibers, similar to a thread of a screw, follow up, then one speaks of spiral grain. (Observe natural wood cracks) very noticeable when debarked pine logs. The thus grown wood has generated tensions in the growth and can not be calmed by columns and long storage. It "raises" herself. Sliced ​​and planed surfaces such wood fibers have a lot more than just cut grown wood.

Damage caused by human intervention: Probably the most annoying mistake is nail or barbed wire! Does the saw blade on a piece of waxed steel, the saw immediately loses its sharpness! Mostly we hear curse sawmill strong, then a new leaf must be sharpened and fitted. Depending on the damage requires the sawyers eg per nail € 35-70!

Irregular growth rings: Normally should be uniform over 75% of the Tonholzfläche Wuch the annual rings. Stark differential growth can throw in the wood and it warps. Wood with irregular annual rings should be rejected. 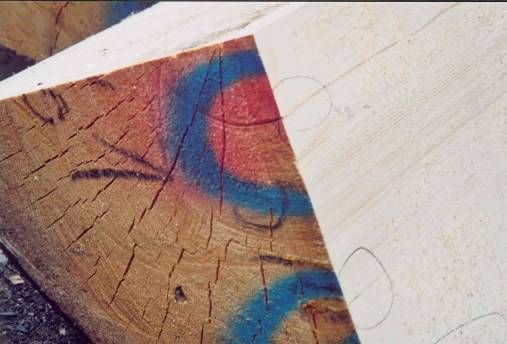 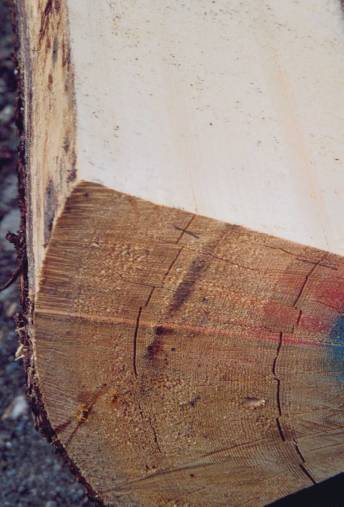 Eccentric growth: building a tree trunk its annual rings not uniform layer by layer to the Stammittelpunkt on, but the layer thicknesses on one side substantially thicker than on the other side, the result is an eccentric habit. You can recognize this on the slightly oval stem cross section and the fact that the wide growth rings usually are very hard and brittle (Redwood). It will take strong and it tears easily. Eccentric growth often occurs in trees which were exposed unilaterally strong winds or were wrong.

Weather damage: If the tree during severe weather Duch lightning, strong frost (wound wood) or strong wind (Bruch) damaged and the tree can the wounds "encircle", these growth changes are highly disruptive to the Tonholzqualität.

Resin pockets not in hardwoods, hardly at firs, strong but with spruce. These are small "resin Lakes" along the annual rings. Dry or empty these places remain voids that weaken the timber and interfere with the Tonübertraung. Emptying resin Gallen clog wildfire saw blades! 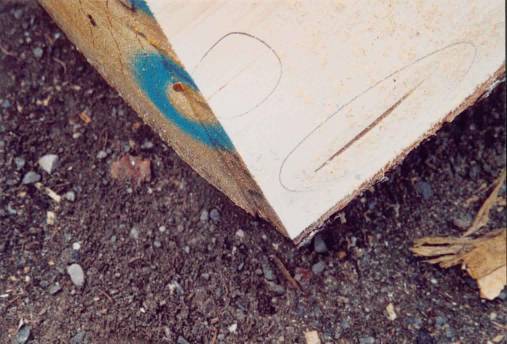 Color changes of the core: there are some species of trees, the wood cells are no longer in direct Nährstoffluss, so the color changes of the core (beech, ash). In addition to these dangerous species, threaten color changes by rotting wood quality considerably. Spruce is often attacked Duch red stain. The otherwise bright Fühholzanteile the annual rings are reddish, at an advanced stage crumbles the trunk, the wood is spongy. Other bacteria and fungi cause cancers, nuclear fungi cause eg in Maple Grünstreifigkeit. Damaged places must be removed for storage, uninfested stem parts can be reused.

How do I know wood damage?

If the tree is not like, you can very well recognize leaves and bark abnormalities. Discolor the leaves, are all parts of the tree in juice? If the tree is strong vermoost adhere many lichens or resin leaks on the bark?

If the tree is felled, you look at the cut surface of (a plane or even a chainsaw, unsightly places you can re-expose). Around the tree considering the bark and look for changes. It should also give people who hold a tuning fork on the wood. Should be tapped with a small hammer against the trunk, an initial indication of the damping quality can also be made here. What is the annual ring structure? Knots, Drehwüchsigkeit ....

But really realize you're doing it until after the sawing!

How now look really beautiful pieces of work in practice? In summary, it is in the picture: 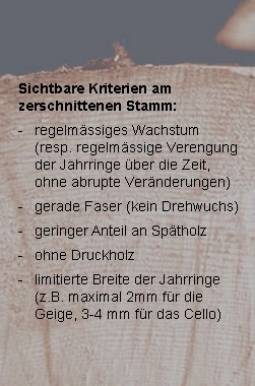 It looks like a piece of cake spruce from the side: 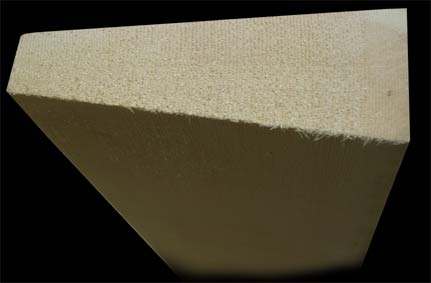 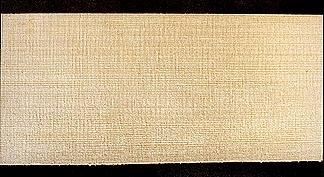 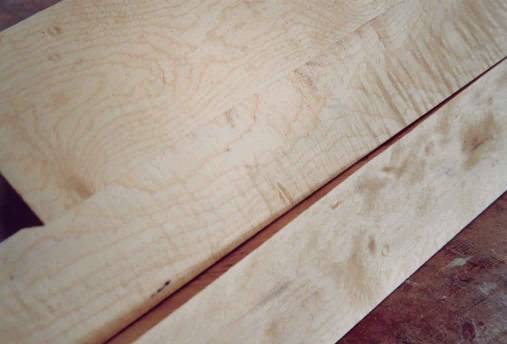